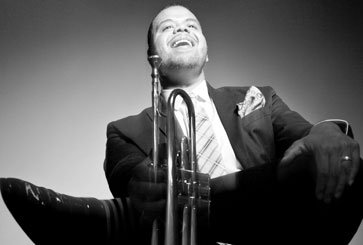 Jumaane (JEW-MAH-KNEE) Smith, trumpeter and vocalist, has already done what most musicians spend their lives dreaming about. He’s traveled the world, played stages in historic clubs, in massive stadiums and at cultural landmarks, recorded a solo album, appeared on national television and performed for two sitting U.S. presidents.

Jumaane will be doing a west coast/homecoming tour this spring in support of his debut album, “I Only Have Eyes For You”, which has sold over 10,000 copies and charted a single at #10 on the Billboard Jazz Chart and #5 on iTunes jazz sales.

He will be touring with Skekirk’s Bandelabra, a Seattle-based punk, jazz quartet.